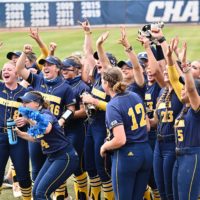 The Mocs softball program endured some growing pains this past season as they lost countless veteran players from the COVID shortened 2020 season but they scratched and clawed and grew together as they’re the three seed heading into the SoCon Tournament which begins on Thursday.

Despite the 13-23 overall record the team finished 8-8 in the conference and had a couple of players recognized for their achievements this past 2021 regular season.

Next, the pre-season Conference Player of the Year favorite didn’t quite win that award but she put together a really solid season atop the Mocs batting order as second baseman Emily Coltharp was named to the All-SoCon Second Team. Coltharp was second on the team in hitting (.318), she led the team in runs scored (20) and hits (34) while contributing four doubles and four RBI’s while playing excellent defense at second.

Finally, a freshman who made a big impact in the middle of the Mocs lineup this season in third baseman Courtney Ball was named to the All-SoCon Freshman Team. Ball was third in the team hitting-wise (.298) while adding some solid stats across the board scoring 12 runs, driving in 11, clubbing one home run, and slashing six doubles.