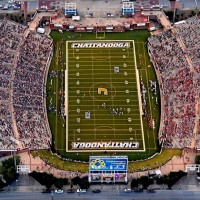 Cookeville, TN has been the host city for the TSSAA BlueCross Bowl at East Tennessee State’s Tucker Stadium since 2009 but there may be a more than welcome shift in venue for 2021…

According to the Times Free Press’s Stephen Hargis, Chattanooga Sports, a division of Chattanooga Tourism Co. among others in the community are in the process of putting together what they hope is a winning bid to take over the TSSAA BlueCross Bowl where the state football championships will be played.

Over the years at Tucker Stadium there have been many complaints regarding the outdated stadium, cramped locker rooms, or even lack of use of a locker room for some teams, leaky restrooms, and unsatisfactory concession stands.

As it sits right now Cookeville and Chattanooga are the only cities that have intentions on submitting a bid according to TSSAA assistant director Matthew Gillespie.

What does Chattanooga have to offer?

They have a state-of-the-art facility in Finley Stadium which holds 20,412 patrons (who knows where we’ll be with COVID by then) and is home to the University of Tennessee at Chattanooga’s FCS football program as well as professional soccer club Chattanooga FC.

The decision between venues will be made at the TSSAA Board of Control meeting which will occur on March 16, 2021. The bids are due by February 26th.

Tim Morgan is the chief sports officer of Chattanooga Sports and had this to say when he talked to the Times Free Press recently about the unique opportunity to host this major prep event.

“It has always been a target of ours to get this championship event here, so when we saw the bid opportunities coming open for this cycle, we began putting together our plan. Our bid will offer both a venue worthy of hosting a state championship as well as a championship experience for players and fans coming into Chattanooga.”

He continued by saying, “I want to be clear that this is not about just our organization. We’re the tip of the spear, but it’s a spear that extends quite a ways because there will be a lot of businesses and people of influence involved in putting this on. This will be about the kids who have worked so hard to achieve a dream, and when they come to Chattanooga we will fulfill a taste of what it’s like to play at the next level.”

There are nine State Championship Games that are played (six public and three private school games) with three games being played each day over a three-day period.

It makes a lot of sense to move the venue to Chattanooga, it’s such a big sports city, there are a ton of hotels in the downtown area as well as the surrounding areas of the city, tourist attractions such as Signal/Lookout Mountain, the aquarium, Ruby Falls, and so much more.

It’s also a significant boost to the economy according to the Cookeville-Putnam County Visitors Bureau they’ve racked up anywhere between $2.5 million to $3 million from visitor spending on an annual basis.

All signs point to this being a tremendous addition to the Chattanooga area if their bid is chosen as the winning bid. The last time a high school state championship game was held in the area was the Class AAA title game which happened in Red Bank in 1978.