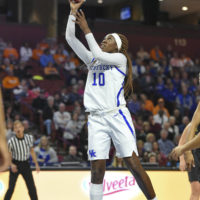 University of Kentucky sophomore guard and Bradley Central High School alum Rhyne Howard has been tabbed a first-team All-American by the Associated Press.

Howard is the first player in UK women’s basketball program in the 25-year history of the rankings to receive first-team honors by the AP. Kentucky has had four first-team All-Americans, but none have received the honor from the Associated Press. The sophomore was recently named Southeastern Conference Player of the Year, First-Team All-SEC and SEC All-Defensive Team by the league’s coaches. She received SEC Player of the Week honors four times.

In her second year at Kentucky, Howard continued to build upon a stellar collegiate career. She averaged 23.4 points per game, shot 43.3% from the field and hauled in a team-leading 6.5 rebounds per game. In a January contest against Tennessee, Howard recorded a top-12 scoring performance when she dropped 37 points in a win over the Lady Vols. Four days later in a game against Alabama, Howard tied the school record for points in a game with 43.

Howard has been named a top-five finalist for the Cheryl Miller Award, which honors the top small forward in the country in women’s basketball. She is also a semifinalist for the Citizen Naismith Trophy, on the national ballot for the John R. Wooden Award and on the latest watch list for WBCA Wade Trophy and Dawn Staley Award.

Fans can vote for Rhyne for the Cheryl Miller Award here.