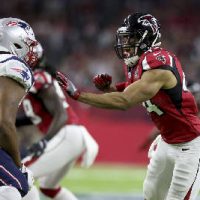 The Tennessee Titans have agreed to terms with former Atlanta Falcons edge rusher Vic Beasley on a one-year, $9.5 million deal with up to $12 million guaranteed.

Beasley comes to the Titans, who had a need for a pass rusher to go along side former first-rounder Harold Landry. Last season, he led the Falcons with eight sacks after having just 1.5 sacks through the first seven games of the season. He finished the 2019 season with 42 total tackles, 12 tackles for loss, two forced fumbles and two passes defended.

His best season came in 2016 where he was named a first-team All-Pro and voted to the Pro Bowl, leading the league with 15.5 sacks. The Clemson product also tied for the most forced fumbles that year with six.

The eighth-overall selection in the 2015 NFL Draft, Beasley has 156 tackles, 37.5 sacks, 11 forced fumbles and an interception through five professional seasons. He turns 28 in July and will look to match his 2016 production after a change of scenery.