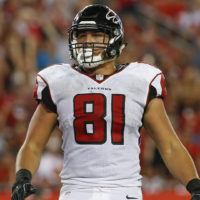 Former Atlanta Falcons tight end Austin Hooper will make the move from NFC to AFC after the 25-year old signed with the Cleveland Browns. The deal, which is rumored to pay $44 million over four years, will make Hooper the NFL’s highest paid tight end.

#Falcons free agent TE Austin Hooper, the top player at his position, is headed to the #Browns, per @TomPelissero, @MikeSilver and me. They’ve agreed to terms, he’s the new highest-paid TE.

Hooper had a stellar campaign in 2019 despite missing three games with an MCL sprain. He hauled in 75 passes for 787 yards and six touchdowns in 2019, all of which were career highs.

A third round pick in the 2016 draft out of Stanford, Hooper spent all four years of his professional career in Atlanta. Through 59 games for the Falcons he caught 214 passes for 2,244 yards and 16 touchdowns. He was a nice safety valve option for quarterback Matt Ryan and proved to be a reliable second option to Julio Jones last season.

Hooper will be inserted into a Browns offense that looked great on paper with weapons such as Odell Beckham Jr., Jarvis Landry and Nick Chubb, but the team still finished 6-10 and third in the AFC North. Quarterback Baker Mayfield will add Hooper to the wide variety of weapons at his disposal in the 2020 season.