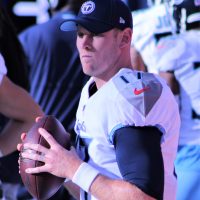 The Tennessee Titans have signed quarterback Ryan Tannehill to a four-year deal that will pay up to $118 million, ESPN’s Jeff Darlington reports.

Ryan Tannehill has agreed to terms on a new four-year contract with the Titans, per source. Here’s the numbers:

The former first round selection in the 2012 NFL Draft took over the starting quarterback role in Week 6 after Marcus Mariota was benched against the Denver Broncos. After a 16-0 loss to Denver, Tannehill led the Titans to a 9-4 record as a starter, which included an AFC Championship appearance.

The Texas A&M alum won the league’s Comeback Player of the Year award in 2019 after finishing with a league-best 117.5 passer rating. The signal caller completed 70.3% of his pass attempts for 2,742 yards, 22 touchdowns and six interceptions last season.

Tannehill took to Twitter to announce the deal and express his excitement about returning to Nashville.