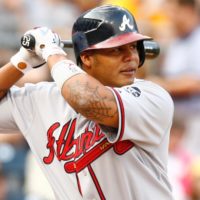 Former Atlanta Brave Andruw Jones made his name in the big leagues for being a speedy outfielder who won ten consecutive gold gloves from 1997-2008. His son, Drew Jones, is a 16-year old sophomore at Wesleyan School just 20 miles north of Atlanta, and has already committed to play baseball for Vanderbilt upon graduation.

The 16-year old phenom is rated as the No. 5 player in his class according to Baseball America. His dad wasn’t know for his hitting during his big league career, but Drew is flipping the script along with his baseball bat.

Jones is rated as a nine on Perfect Game’s scouting scale, with ten being the best. He has been clocked at 90 MPH on the mound and through 120 games in Perfect Game summer tournaments, he has an OPS (on-base percentage plus slugging percentage) of 1.306. His dad had a career OPS of .823 in 17 MLB seasons.