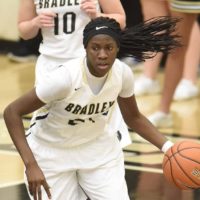 Former Bradley Central Bearette and current University of Kentucky sophomore guard Rhyne Howard has been tabbed the women’s basketball SEC Player of the Year, the league announced on Tuesday.

The former Bearette has had a sensational sophomore season for Kentucky, leading the team with 23.3 points per game, which is the best average under head coach Matthew Mitchell. The guard also leads UK in rebounds per game (6.4) and is second on the team in blocks (27) and third on the team in assists (60). She is only four three-pointers shy of setting a program record set by Sara Potts in 2004-05 for three-pointers made in a season.

Rhyne Howard is the third player in the University of Kentucky women’s basketball history to receive conference player of the year honors, joining Victoria Dunlap and A’dia Mathies.