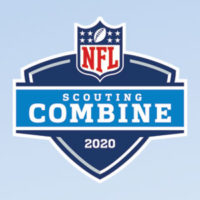 Hundreds of NFL Draft prospects flocked to Indianapolis’ Lucas Oil Stadium for the NFL Combine. The combine is an opportunity for those prospects to be evaluated by the league’s scouts and executives. The Southeastern Conference had their fair share of talent representing the league’s fourteen institutions.

Here is a list of the SEC football alumni that turned in a good showing at this weekend’s combine:

Nobody dominated the NFL Combine quite like Alabama wide receiver Henry Ruggs. The speedy receiver was clocked at a 4.27 in the 40-yard dash, which is one of the top five fastest times since 2006. Ruggs followed that impressive 40-yard dash time with a 42-inch vertical jump. According to ESPN Stats & Info, Ruggs is the first player to produce both a sub-4.3 40 and a vertical jump of 40 inches.

Tight ends are hardly ever picked during the early rounds of the draft, but Missouri tight end Albert Okwuegbunam’s performance at the combine made a case to reverse that trend. Okwuegbunam recorded the fourth-fastest 40 time of any tight end since 2003 with a 4.49. The Missouri pass catcher definitely took advantage of the chance to be seen in front of NFL scouts and executives.

Gay Jr. competed in the same position group as freak athlete Isaiah Simmons, but he went toe-to-toe with the Clemson linebacker during the Saturday session of the combine. Simmons jumped an impressive 11-feet on the broad jump, but Willie Gay Jr. beat him by four inches moments later. Gay followed that with a 39.5-inch vertical jump and a 4.46 40 time compared to Simmons’ 39-inch leap and 4.39 40. His numbers were not far off of one of the best pure athletes in the combine could cause Gay’s draft stock to rise.

The Florida defensive back turned in a good showing on the final day of the NFL Combine. The Miami, Florida native is a projected first round draft pick and he solidified that projection on Sunday. Henderson ran a 4.39 40-yard dash, recorded 20 reps on the 225 bench press and possessed polished footwork during the position drills. The 6-foot-1 cornerback is ESPN Draft analyst Mel Kiper Jr.’s No. 23 overall prospect in this year’s draft class.

Queen’s performance at the combine didn’t blow anyone away like fellow linebacker Isaiah Simmons from Clemson, but the former LSU Tiger put together a solid showing on Saturday. The 2019 national champion ran a 4.51 40 and was tops in his position group in the bench press (20 reps) and vertical jump (35 inches). Queen, who is ranked at No. 1 on Kiper’s inside linebacker board, pulled up at the end of his 40-yard dash with an apparent hamstring injury.

LSU’s Patrick Queen zooms to a 4.51 before pulling up with an injury.
https://t.co/LcYCVt3j1A

The NFL Draft will take place April 23-25 in Las Vegas, Nevada. Round one will take place on Thursday, followed by rounds two and three on Friday. The other four rounds will be held on Saturday, wrapping up the event in the Sin City.