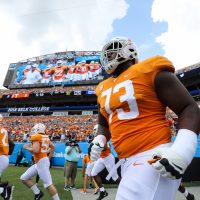 Tennessee offensive lineman Trey Smith has won the Jason Witten Collegiate Man of the Year Award, which is awarded annually to a Division I football player that has displayed great sportsmanship both on and off the field.

Smith was presented with the award Tuesday night at the Dallas Cowboys practice facility in Frisco, Texas.

In 2018, doctors discovered blood clots in Smith’s lungs leading to uncertainty of whether or not he would be able to continue to play football. In late August of last year, Smith was cleared by doctors to play in Tennessee’s season opener. That season, Smith went on to earn first-team All-SEC honors.

Over the last two seasons, Smith has organized coat drives for the Knoxville Area Rescue Ministry. ESPN reports that over 2,000 coats have been donated since Smith became involved.

A $10,000 contribution by Jason Witten’s SCORE Foundation will be made in Smith’s name to his school’s athletic scholarship fund.

Air Force quarterback Isaiah Sanders and University of Southern California wide receiver Michael Pittman were the other two finalists for the award.