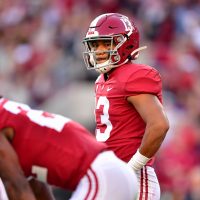 Tua Tagovailoa suffered a season-ending injury against Mississippi State, effectively ending his collegiate career. Despite the injury, No. 13’s draft stock has not wavered, and oddsmakers at Caesars Sportsbook released the latest odds for who could select the former Alabama signal caller in April’s NFL Draft.

The Miami Dolphins and Detroit Lions are the favorites to select Tagovailoa (-110). The Los Angeles Chargers (5-2), Cincinnati Bengals (7-1), Carolina Panthers (7-1) and the Jacksonville Jaguars (9-1) round out the list of potential teams to pull the trigger. ESPN NFL Draft analyst Mel Kiper has Tua going No. 3 overall to the Lions come April.

Lions quarterback Matthew Stafford struggled last season. The No. 1 overall pick in the 2009 NFL Draft dealt with a back injury this past season, which caused him to start in only eight games. The Lions looked lost offensively without Stafford under center. In Stafford’s absence the team went 0-8 and scored an average of just over 17 points per game through eight games.

The Lions are definitely a possible landing spot for Tua and the Dolphins have loved the Alabama gun slinger since the “Tanking for Tua” talks emerged. The NFL Draft is set for April 23 in Las Vegas, Nevada.