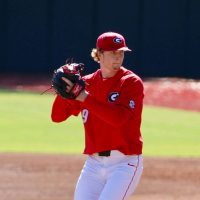 Heritage alum and University of Georgia pitcher Cole Wilcox was named to the 2020 Golden Spikes Award watch list. The 55 player list contains Wilcox and his UGA teammate, RHP Emerson Hancock. The Golden Spikes Award is given to the best college baseball player in the country.

Wilcox earned freshman team All-SEC honors in year one as a Bulldog. The 6-foot-5, 232-pounder was 3-2 with a 4.07 ERA in 19 appearances, six of which were starts. He held opposing hitters within the conference to a .198 batting average in 35 innings of work. Wilcox was also named to the SEC First-Year Academic Honor Roll. He capped off his impressive freshman campaign with a spot on the USA Collegiate National Team’s 26-man travel roster. The righty finished with a 2.57 ERA in four appearances including one start for the USA National Team, which was a winning effort against Cuba.

As a prep star at Heritage, Wilcox led the Generals to the program’s first two region titles, two final four appearances and an elite eight appearance. He began to garner national attention from different media outlets and scouts, earning Catoosa County Male Athlete of the Year, Scrappy Moore Male Athlete of the Year and All-American honors from Perfect Game and Baseball America. He was a projected first-round draft pick in the 2018 draft, but opted to attend the University of Georgia.

Cole Wilcox will be Georgia’s Saturday starter during weekend series. He is eligible for this summer’s first-year player draft and is projected to hear his name called in the first round.