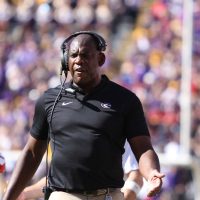 Former University of Georgia defensive coordinator Mel Tucker has been hired to be the next head coach at Michigan State.

Tucker will replace Mark Dantonio, who retired last week after 13 seasons at Michigan State. He was 114-57 in 13 season as head coach of the Spartans and reached the College Football Playoff in the 2015 season. Dantonio was MSU’s winningest head coach and won at least a share of three conference championships in East Lansing.

The former UGA defensive coordinator tweeted on Feb. 8 that he would not be leaving Colorado and said he was “committed” to the program. Tucker went 5-7 in his first season as a head coach. The Buffs finished 3-6 in the Pac-12 and ranked fifth in the south division. It was his first head coaching job since taking over as the interim head coach for the Jacksonville Jaguars in 2011 following the firing of Jack Del Rio.

While I am flattered to be considered for the HC job @MSU_football, I am committed to @CUBuffsFootball for #TheBuild of our program, its great athletes, coaches & supporters. #UnfinishedBusiness #GoBuffs

We are #Relentless #Culture #TheBuild

Tucker began his coaching career in 1997 as a graduate assistant for Michigan State under then head coach Nick Saban. After spending time at LSU and Ohio State as defensive backs coach, he spent nine years coaching in the NFL for three different teams, the Cleveland Browns (2005-2008), Jacksonville Jaguars (2009-2012) and Chicago Bears (2013-2014).

He takes over a Michigan State program that finished 7-6 overall and 4-5 in the Big Ten. The Spartans capped off what would be Dantonio’s final season in East Lansing with a 27-21 win over Wake Forest in the New Era Pinstripe Bowl.  Tucker will inherit the No. 46 ranked recruiting class according to ESPN.