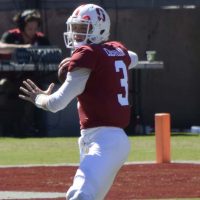 Former Stanford quarterback KJ Costello will join the Mississippi State football roster as a graduate transfer. He will have one year of eligibility remaining after spending three years at Stanford. Costello announced the move via his personal Twitter account

Thank you Stanford🙏🏻 Dreams do become reality. Excited for what is next📈 #HailState pic.twitter.com/LibimJIsBR

The signal caller started 25 games over his three seasons at Stanford, throwing for 6,151 yards, 49 touchdowns and 18 interceptions in his career. His redshirt-sophomore season was his best, as Costello was second among Pac-12 passers in yards (3,540) and completions (269). Costello also led the conference in passing touchdowns that year with 29, and was third in the country. Costello served as the Cardinal’s captain for two seasons. After earning second-team All-Pac-12 honors in 2018, he was riddled with injuries the following season. The 6-foot-5, 225-pounder only played in five games last season.

He joins a Mississippi State team that returns quarterback Garrett Shrader who started four games as a freshman last season, and accounted for 1,757 yards of total offense and 14 total touchdowns. The Bulldogs also return Keytaon Thompson, who appeared in 19 games, but only one game last season.

Costello joins new Mississippi State head coach Mike Leach, who led his Washington State Cougars to the nation’s top passing offense in four of the past six seasons. Costello faced Leach’s Cougars in each of his first two seasons with the Cardinal. He threw for 323 yards and four touchdowns in their meeting in 2018.