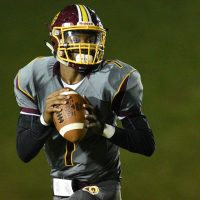 The Tyner star received an offer from ‘Dream U’ earlier this month and decided to commit to the Pirates after an official visit last weekend.

Ryals announced his commitment via his personal Twitter account. The 6-foot-2, 195-pound athlete played both sides of the ball for the Rams, playing quarterback and defensive back. At quarterback, Ryals threw for 1,239 yards, 16 touchdowns, and 7 interceptions. He also ran for 418 yards and nine touchdowns. On defense, Ryals led the team with 116 total tackles, 22.0 of which were for loss. He added 3.0 sacks, and three fumble recoveries to a very impressive stat line.

The Independence Pirates are getting a versatile playmaker in Ryals. Indy will be able to utilize Ryals’ various skills to their benefit, whether its on the offensive or defensive side of the ball. Martavius Ryals joins Tyner teammate Jeremiah Batiste (Miami OH) as the two Rams who will be on collegiate rosters next season.