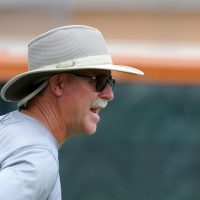 Pruitt, father of University of Tennessee head coach Jeremy Pruitt, coached Marion County to back-to-back 7-win seasons in 2004-05 & is nine wins from 300 for his career that has spanned over 40 years.  In Pruitt’s one season in Trenton, the Wolverines were 2-8 overall, and 2-5 in Georgia’s Region 7-AA. He will inherit a Marion County program that went 3-8 a season ago, and finished third in Region 3-AA.