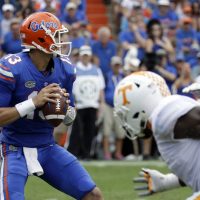 Former Florida Gator quarterback Feleipe Franks will shift from the SEC East to the SEC West next fall, as the signal caller announced his intentions to transfer to Arkansas.

Feleipe Franks began the 2019 season as the Gators starting quarterback, but suffered a season-ending injury against Kentucky last September. Kyle Trask took the reigns of the offense and led UF to a 11-2 overall record and an Orange Bowl victory. In his Florida Gator career, Franks threw for 4,593 yards and 38 touchdowns. His best season statistically was the 2018 campaign, Dan Mullen’s first year as UF’s head coach. Feleipe Franks threw for 2,457 yards, 24 touchdowns, and six interceptions that year, and led the Gators to a Peach Bowl victory over Michigan.

He joins first-year head coach Sam Pittman and former Florida State offensive coordinator Kendal Briles in Fayetteville. He will bring stability to the quarterback position for the Razorbacks, and will provide an experienced option for Pittman in his first year as a head coach.