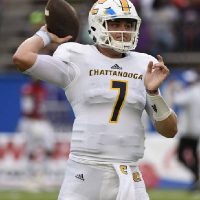 Chattanooga Mocs quarterback Nick Tiano spent much of last week showcasing his talents in front of NFL scouts at the NFLPA Collegiate Bowl. The week long event concluded Saturday when Tiano’s National team defeated the American 30-20. Tiano’s 135 yards passing and one passing touchdown would earn him the game’s MVP honor.

Nick Tiano was an efficient 8 of 10 passing, and his lone touchdown came in the second quarter. After the American team punted the ball away to the National team, the UTC signal caller found Arkansas State’s Kirk Merritt, who hauled in the pass in double coverage for a 48-yard score.

Tiano took advantage of the week long chance to put his talent on display in front of NFL scouts, coaches, and front office executives. The NFLPA Collegiate Bowl had all 32 NFL teams represented at the event. FCS level players often don’t get the opportunity to put themselves in front of NFL personnel, and Tiano was able to capitalize on his opportunity.