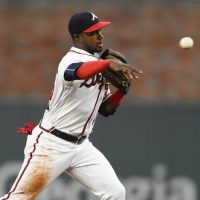 Infielder Adeiny Hechavarria and the Atlanta Braves are in agreement on a one-year, $1 million contract, a source familiar with the deal tells ESPN. Good utility option who played second, short and third while with the Braves last season.

Hechavarria split time with the Mets and Braves in 2019, and came to Atlanta in August on a free agent contract. He filled the hole made by injuries all over the Braves’ infield, and in 24 games with Atlanta, Hechavarria slashed .328/.400/.639. The shortstop added four home runs, 15 RBI, and 14 runs scored. Hechavarria’s stat line was a pleasant surprise for the Braves in 2019.

The signing of Adeiny Hechavarria addresses the need of infield depth for Atlanta. The defensive specialist will provide versatility to a Braves infield that lost Josh Donaldson to the Minnesota Twins earlier this week. Hechavarria can spell Dansby Swanson at short, and be a reliable back up for Ozzie Albies at second base.

The Atlanta Braves now have 39 players on their 40-man roster with the addition of Hechavarria.