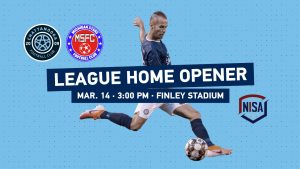 The Chattanooga Football Club announced today that the club will host Michigan Stars FC at Finley Stadium on Saturday, March 14 at 3 p.m. ET for the first home match of the National Independent Soccer Association season.

The match will serve as the Michigan Stars’ second trip to the Scenic City, who drew against Chattanooga FC 1-1 during their first visit last year. CFC earned three-points with a 4-1 road victory in Michigan.

When asked about the upcoming match with the Michigan Stars, CFC head coach Peter Fuller said, “We will be counting on our team to come out of the gates strong, because we know that the competition will be fierce. We have a great environment in Finley Stadium, and we know that the crowd will serve as a twelfth man. It’s going to be a great year.”

The complete NISA season schedule will be released later this month. Chattanooga FC will open the league season on the road against the Oakland Roots on February 29.

Click here for annual passes and group hospitality packages, which are now on sale. Single game tickets will be available for purchase on February 24.

You can read the club’s original release here.