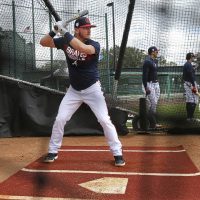 Free agent third baseman Josh Donaldson has agreed to a four-year, $92 million deal to join the Minnesota Twins. Donaldson spent the 2019 season with the Atlanta Braves, and is a career .273 hitter in nine MLB seasons.

In 2019, Josh Donaldson was awarded National League Comeback Player of the Year after playing in 155 games compared to 52 in 2018. Donaldson slashed .259/.379/.521 in his age-33 season, blasted 37 home runs, and drove in 94 runs. He was also one of three National League Gold Glove Award finalist at third base along with Anthony Rendon and award winner Nolan Arenado.

Donaldson joins a Minnesota lineup that set a Major League record with 307 home runs in 2019. The Bringer of Rain is the sixth player in the Twins lineup to have hit 30 or more home runs last season.

The quick departure of Donaldson leaves Johan Camargo and Austin Riley as the only two third baseman on the 40-man roster. Camargo will likely get the Opening Day nod at the hot corner, and Riley will mix in at some point. The departure also leaves a hole in the home run numbers for the Braves, as Donaldson finished third on the team with 37 home runs, which accounted for nearly 15% of the team’s home runs.