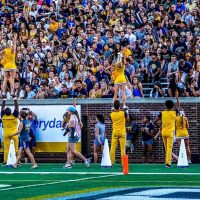 The Mocs open the 2020 season on the road against Western Kentucky on Sept. 5. The Hilltoppers opened the 2019 season with a 35-28 upset loss to FCS Central Arkansas, but bounced back quickly and finished the season with a 9-4 overall mark, including a win over Western Michigan in the SERVPRO First Responder Bowl.

Things don’t get much easier for the Mocs in Week 2 as they travel to Harrisonburg, Va. to take on FCS power James Madison. The Dukes have reached the FCS National Championship Game three out of the last four years and defeated Youngstown State to win the title in 2016. JMU fell to North Dakota State in the 2017 title game and again this season by the score of 28-20. JMU beat UTC 37-14 in Chattanooga this past season. The 2020 match-up is the last contest in a two-game non-conference series.

The Mocs’ first home game of the season comes on Sept. 19 against North Alabama. The Lions went 4-7 in 2019, the program’s second year at the FCS level. The game is the first of a four-game series with North Alabama.

On Sept. 26, UTC opens SoCon play at home against VMI. Kickoff is scheduled for 6 p.m. ET. Mercer will serve as the Mocs’ opponent on Homecoming, which will take place on Oct. 24. UTC will close the 2020 regular season slate at home against Samford on Nov. 21.