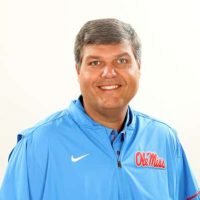 The University of Georgia announced via Twitter that former Ole Miss head coach will be returning to the SEC as the Dawgs Associate Head Coach and Offensive Line Coach.

Luke replaces Sam Pittman, who recently accepted the head coaching job at Arkansas. Matt Luke was the head coach at Ole Miss for the past three seasons, going 15-21 as the head man in Oxford. He’s spent time as an offensive line coach at Ole Miss, Tennessee, and Duke. In his time at Ole Miss, he landed recruits such as Larmey Tunsil and Greg Little, and had two first-round selections in the NFL Draft, Tunsil and Laken Tomlinson.

Georgia is expected to lose both starting tackles, Andrew Thomas and Isaiah Wilson, to the NFL draft. There is a possibility junior guard Ben Cleveland could leave for the pros as well. The Bulldogs have verbal commitments from four offensive linemen in the 2020 ESPN 300: No. 1 tackle Broderick Jones, No. 2 center Sedrick Van Pran, No. 11 tackle Tate Ratledge and No. 19 tackle Chad Lindberg. These prospects, should they decide to honor their verbal commitment to UGA, can sign their letters of intent as early as next week when the NCAA’s Early Signing Period begins.