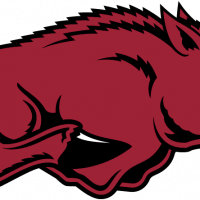 Former University of Georgia Offensive Line coach Sam Pittman will be the Arkansas Razorbacks’ next head coach. Arkansas Director of Athletics Hunter Yurachek took to Twitter to express his excitement on the hire of Pittman.

Excited to OFFICIALLY announce Sam Pittman as our new Head Football Coach. Great days ahead for the Hogs with Sam and Jamie as a part of the Razorback family again! #OneRazorback pic.twitter.com/763JrRrpaR

Pittman has been recognized for building Georgia’s offensive line over his time in Athens. Pittman recruited multiple blue-chip recruits to Athens, including four linemen in the Class of 2020’s ESPN 300. Pittman was the assistant head coach, offensive line coach and recruiting coordinator at Arkansas from 2013-2015 before joining Kirby Smart’s staff. Pittman also coached at Tennessee and North Carolina before heading to Fayetteville before the 2013 season.

Sam Pittman will replace Chad Morris, who was fired during the 2019 season. The Razorbacks finished this season 2-10 overall, and have lost 19 consecutive games to conference opponents. Pittman is Arkansas’ fourth head coach in the last decade.