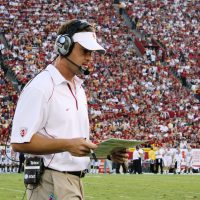 After Lane Kiffin led his Florida Atlantic Owls to a Conference-USA Championship crown news broke that he will be taking over the Ole Miss Rebels football program as head coach. In Kiffin’s three years at the helm of FAU football, the Owls won ten or more games. FAU was 26-13 during Kiffin’s time in Boca Raton.

Kiffin is 44, and has been the head coach for an NFL team (Oakland Raiders), an SEC school (Tennessee), and college football blue blood USC. He replaces former Ole Miss head coach Matt Luke, making him the Rebels’ fourth different head coach in the past ten seasons. Luke was fired after just three seasons in Oxford, after compiling a 15-21 record, including a 4-8 finish this season.

Lane Kiffin becomes the fifth current SEC head coach who has served as an assistant for Alabama head coach Nick Saban. He is 61-34 all-time as a college football head coach.