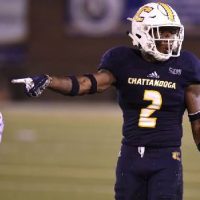 Its been a long time coming for former UTC defensive back and Chattanooga native Kareem Orr. The Notre Dame High School product went undrafted in this past year’s NFL Draft. After signing as an undrafted free agent in May, Orr finally made his NFL debut Sunday afternoon for the home-state Titans against the Indianapolis Colts. He finished with eight tackles, which was the second-most for Tennessee in their 31-17 win.

Tennessee was without three of their top four corners heading into Sunday, which led to a promotion for Kareem Orr from the practice squad. An injury to Adoree Jackson against the Colts thinned the Titans defensive backfield, and Orr was able to contribute, playing 48 snaps Sunday.

Before coming to Chattanooga, Orr was a Freshman All-American at Arizona State in 2015 and set the ASU freshman record with six interceptions. Orr decided to transfer to Chattanooga following the spring of 2017 and added a All-SoCon first-team selection to his résumé as a senior with the Mocs, totaling 34 tackles and four interceptions.