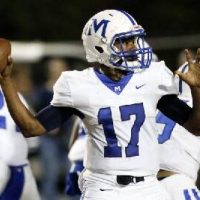 McCallie (10-2, 4-1) had revenge on their minds Friday night as they welcomed Ensworth (8-4, 3-2) to town in a Division II-AAA semifinal matchup. The Blue Tornado came out of the gates on fire, clinging to a 21-0 lead after one quarter. Ensworth wouldn’t go quietly though, as they matched McCallie’s three scores with three of their own, tying the score at 21. After a touchdown run from Gavin Cagle put McCallie up 28-21 with 1:46 left, Tigers receiver Isaiah Horton broke free from the secondary on a 36-yard touchdown pass from Gerard Bullock, making the score 28-27. Ensworth head coach Roc Batten elected to go for two and the win, but Eric Rivers had other things in mind. The McCallie defensive back intercepted Bullock’s pass and would clinch McCallie’s first State Championship appearance since 2006. Deangelo Hardy would find his way to the end zone late in the game, making the score 35-27 before the fourth quarter horn would sound.

The backfield of Deangelo Hardy and Gavin Cagle provided all of the offense McCallie would need in the win. Hardy rushed for 170 yards and scored three touchdowns while completing six passes for 76 yards. Cagle added a rushing score to go along with 92 yards on the ground.

Caleb Jones and Eric Rivers each had an interception. Rivers’ pick was returned 41-yards for a touchdown. The McCallie defense suffocated the Ensworth run game, holding them to minus 10 yards in that department.

The Blue Tornado will travel to Tucker Stadium on the campus of Tennessee Tech in Cookeville, Tennessee to tangle with MBA. Kickoff is set for 7:00 p.m. ET on Thursday, December 5, 2019.