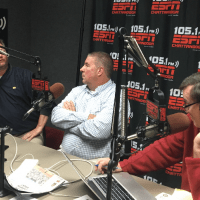 Earlier this week, the New York Times published a story about a proposal from Major League Baseball that would cut 42 lower minor league teams. Shockingly, the list included your hometown Chattanooga Lookouts, who have been playing baseball in the Scenic City since the early 1900’s.

Lookouts president Rich Mozingo joined Press Row on Tuesday to discuss the proposal and the threat his team and others face across the minor leagues.