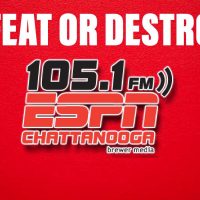 Two crucial region losses to Sequoyah and Allatoona has the Dalton Catamounts (7-3, 5-3) traveling south to Dacula to face the No. 1 ranked Falcons. Georgia Tech commit and Dalton RB Jahmyr Gibbs boasts his 2,358 yards and 39 rushing touchdown stat line, but Dacula’s stout run defense will have a plan to keep Gibbs’ production to a minimum.

Rhea County (9-2, 2-1) forced four fumbles in last week’s first round win. The Eagles will have to force turnovers and execute their run-heavy offensive attack at a premium in order to hand Powell (11-0, 6-0) its first loss of the season.

Upperman signal-caller Donoven McCallister is a TSSAA Mr. Football finalist in Class AAA, and will be running all over his home field Friday night. Red Bank needs to halt his running and passing ability in order to advance.

Trousdale County (9-1, 4-1) was able to handle Tyner in last year’s playoff meeting 35-0. Tyner (8-3, 5-0) was held to just 77 yards of offense. Tyner has to have a better offensive showing if they want to advance into the third round of the postseason.

Whitwell is playing well at the best time to do so. The Tigers have won two straight, including an upset of previously No. 1 ranked Monterey 21-7. Whitwell’s magical season will continue if they can play sound defensively like they have in the last two games.

These two teams met in a monsoon on October 25 with Baylor winning 14-6. The weather conditions will be much better than they were in the first matchup, which will bode well for Baylor RB Elijah Howard. Howard will have to continue his production during this stellar campaign for the Red Raiders to advance to the next round of the postseason.

Christian Brothers travels to McCallie looking to dethrone the No. 3 ranked Blue Tornado. McCallie suffered two tough losses to end the regular season, but are looking to get back on track when they open up postseason play on Friday night.

CPA has six losses on the season, and all six teams are still alive in the playoffs. Five of those teams are ranked in a higher classification, and their other loss came to Evangelical Christian, who is the top-ranked program in DII-AA. Chattanooga Christian’s magical season included a home playoff game last week, the first in program history. This magical stretch can continue if the Chargers can contain CPA WR Maverick Rodriguez. Rodriguez was a standout in last week’s win, hauling in five passes for 143 yards, and two touchdowns.