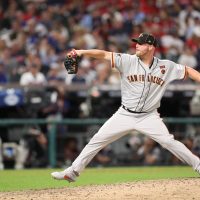 The Atlanta Braves acquired the services of former Giants closer Will Smith on Thursday in the first big move of the off-season. The deal is 3-years for $39 million and includes a $13 million club option for 2023 and a $1 million buyout, per ESPN’s Jeff Passan.

Smith was highly-effective as the Giants closer in 2019, compiling 34 saves with a 2.76 ERA over 65-innings during an all-star campaign, and should bolster a Braves bullpen that struggled at times last season.

Multiple reports say the Braves will continue to look for bullpen help this off-season.

The Braves traded for relievers Shane Greene, Mark Melancon and Chris Martin before the 2019 deadline. Martin is a free-agent, but could return to Atlanta in 2020 if the two sides can reach a mutually beneficial deal.

Atlanta has been linked to third baseman Anthony Rendon and starter Madison Bumgarner. Both received a qualifying offer from their current clubs.