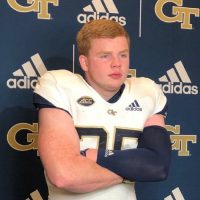 Dalton High School’s John Ross announced via Twitter that he will be continuing his academic and football careers at Georgia Tech. Ross was in Atlanta for Georgia Tech’s home loss to The Citadel before making his announcement. Ross took most of his snaps on the defensive line for the Catamounts in 2018, and the senior is off to a great start in 2019. He totals 33 tackles, including a 13 tackle performance last Friday night against Creekview, to go along with 2.0 sacks on the season.

Better late then never so I’m proud to announce that I’ll be a preferred walk on at Georgia Tech next year! #404 @coachchoice @CoachCollins pic.twitter.com/t0KI7y3gk5

Ross joins Dalton teammate Jahmyr Gibbs, who has also given his verbal commit to the Ramblin’ Wreck. Gibbs has had an exceptional start to his senior campaign as well, totalling 1,144 yards and 23 touchdowns through 4 games. Both Ross and Gibbs are being recruited by former Georgia Tech star and current running backs coach Tashard Choice.