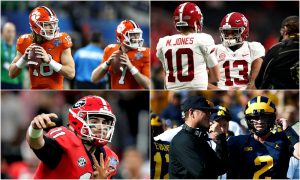 The Amway Coaches Poll was released earlier today, and there were no surprises at the top. Clemson and Alabama were ranked right where they finished last season, No. 1 and No. 2 respectively.

There was a huge SEC-flavor near the top of the poll. The Georgia Bulldogs were ranked 3rd, LSU was ranked 6th, Florida was ranked 8th, and Texas A&M was ranked 11th. There was one more SEC team ranked, and it was Auburn at No. 16.

See the full rankings below