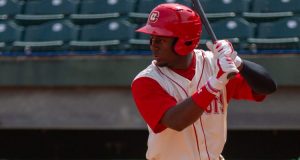 Taylor Trammell went 1-for-4 at the plate last night, as the Chattanooga Lookouts picked up the win vs. the Tennessee Smokies. Little did Trammell know, it would be his final game in a Lookouts uniform.

Trammell, who is the No. 14 ranked overall prospect in all of the minor leagues, was sent to the San Diego Padres as a part of a 3-team trade that included several moving parts.

In the deal, the Cleveland Indians receive outfielder Yasiel Puig from the Reds (another former Lookout), and Franmil Reyes from the Padres. The Reds received right-handed pitcher Trevor Bauer from the Indians. The Padres got Trammell from the Reds (the parent club of the Chattanooga Lookouts).