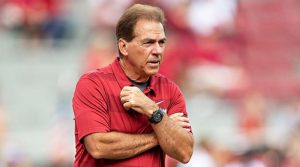 The phrase of the college offseason has been the “transfer portal”, as we have seen more and more players on the move, attempting to leave their current school for another. We have also seen some notable players such as Ohio State QB Justin Fields (who transferred from Georgia) and Miami QB Tate Martell (who transferred from Ohio State) be granted waivers to play immediately, without having to sit out a season.

Nick Saban was asked about his thoughts on the transfer portal.

“We’ve gotten very liberal on giving people waivers. So when you do that, it becomes free agency… that’s not good for college football. There should be a rule that everyone sits out a year if they transfer.”

It was reported last month that the NCAA would in fact tighten their regulations, making it more difficult to be granted immediate eligibility when transferring.