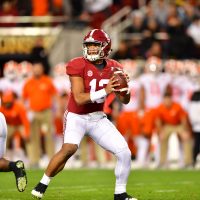 University of Alabama junior quarterback Tua Tagovailoa spoke with the media today on day three of SEC Media Days 2019 in Hoover, Ala.

On debriefing the success of his last season with his family…
“The success that I had last year is just last year. We need to keep focusing on who we can
be this year as far as a team, and we will go from there.”

On the loss to Clemson in the National Championship…
“Coming off of that loss to Clemson and then during my freshman year, we won the
National Championship, I think they were both good. I know this sounds weird, but
when you win, it is a great feeling, and when you lose, it isn’t a great feeling. I think since
we lost, it was a good experience for our team entirely, because a lot of us have come back
and it is something that we don’t take for granted now. Winning isn’t something that you
should take for granted.”

On his younger brother being at Alabama…
“It’s fun. We kind of came to this thing where, on the field, it is business. He has to work,
and I have to work, and everyone is working for a job. Everyone is working for a spot. But
off the field, that is my brother and that is someone I have to take care of and love on him
and if he needs anything, then I am going to be there for him. It’s kind of like there is a
switch that goes on when we’re on the field, and there is a switch that goes off when we are
off of the field.”