SEC Commissioner Greg Sankey announces that SEC Media Days will be returning to Atlanta in 2020, going to Nashville in 2021. 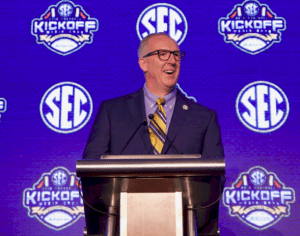 During his opening address at 2019 SEC Media Days, Commissioner Greg Sankey made an anticipated announcement regarding the future of SEC Media Days. That future will include the event returning back to Atlanta, GA (where it was hosted last year). It will once again be hosted by the Chick-fil-A Peach Bowl Group at the Omni Hotel/College Football Hall of Fame. Sankey cited last year’s SEC Media Days in Atlanta as a “huge success”, and the reason behind why they were returning there.

The 2021 location will be a new one however, as the event will make it’s first trip to Nashville. The SEC is no stranger to the Music City, as it has been the home of the SEC Men’s Basketball Tournament several times in the last 15 years. It will be held at the brand new Grand Hyatt Hotel in downtown.

Our summer football event will stay on the move for 2021 at a new destination, as we head to #MusicCity and the new Grand Hyatt Nashville! pic.twitter.com/xx4r8aSvE5