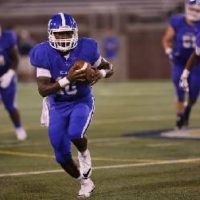 McCallie starting quarterback DeAngelo Hardy committed to Kennesaw State this afternoon. He has been recruited as a 2 star athlete, but has received offers from programs like Air Force, Army, and Austin Peay. He was also being recruited by the Chattanooga Mocs.

Hardy has started at McCallie for the past two years at quarterback. He has compiled an overall record of 18-6 with the Blue Tornado, and accumulated more than 2400 all-purpose yards and 25 touchdowns as a deadly dual-threat quarterback. He lead his team to two straight semi-finals in the state playoffs. He was also a semi-finalist for the 2018 Tennessee Titans Mr. Football award.