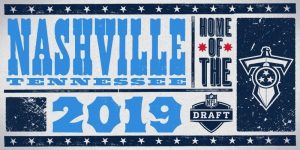 NASHVILLE – The NFL and the Nashville Convention & Visitors Corp today announced plans for the 2019 NFL Draft Experience, presented by Oikos®Triple Zero, a free three-day football festival held outside of Nissan Stadium during the 2019 NFL Draft on April 25-April 27. The Experience will be the largest NFL Draft festival footprint to date, and in recognition of Music City, will be the first to integrate a free live music concert series featuring 20 Nashville-based artists of all genres.​

GRAMMY-winner Tim McGraw will headline the concert series at the Draft Main Stage in downtown Nashville. McGraw, who serves on the Nashville Local Organizing Committee for the Nashville Draft, has had 43 number-one radio singles, 16 number-one albums and countless industry awards and accolades. McGraw recently performed for the NFL’s official Tailgate party at Super Bowl LIII in Atlanta.

“We’re excited to show NFL fans from around the country why there’s no better place for the Draft than Music City,” said Steve Underwood, President and CEO of the Tennessee Titans. “Along with the Nashville Convention & Visitors Corp, and some of Tennessee’s most talented artists, musicians and businesses, we’d like to welcome the NFL family to our team’s hometown.”

In addition to the Draft Main Stage performances, GRAMMY-nominated CeCe Winans will sing the National Anthem to open NFL Draft activities on Thursday, April 25. Throughout the week, the Draft Experience Stage will feature 15 Nashville-based acts representing diverse genres of music ranging from pop and indie rock to country. Additional performances and headliners will be announced in the coming weeks.

“Each year, the NFL strives to make the Draft weekend a memorable experience for our fans. The passionate fan base and iconic location will ensure a unique experience that is unlike anything fans have ever seen” said NFL Executive Vice President, Club Business & League Events, Peter O’Reilly. “We want to thank the Tennessee Titans and the city of Nashville for being a gracious host for the 2019 NFL Draft. We would also like to thank Tim and CeCe for generously giving their time to our fans to make their experience even more memorable.”