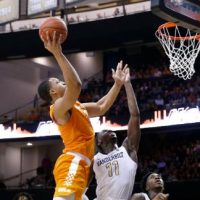 The SEC has announced its votes for individual accolades for the 2018-19 season. Kermit Davis won Coach of the Year after leading Ole Miss to a 20-11, 10-8 record after being picked to finish last in the SEC. The Rebels also had a First and a Second Team player after going without any last season.

Last year, Tennessee won a share of the SEC Title and dominated with the Barnes as Coach of the Year, Williams as Player of the Year, and Turner as Sixth Man of the Year. The Vols missed out on a regular season title this season and didn’t get a 6th Man or COY, but they have two First Team picks in Admiral Schofield and Grant Williams. Jordan Bone also made Second Team.