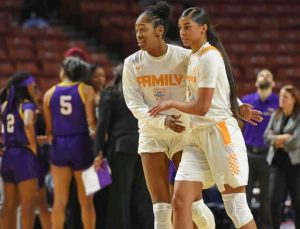 After Tennessee handled Ole Miss in Oxford earlier this week, the Lady Vols were projected as one of the First Four In for the NCAA Tournament. They were projected as an 8 seed for the SEC Tournament, and the 2nd round matchup against 9-seed LSU was in many ways a play-in game for the Tournament considering both teams were on the bubble.

The Lady Vols (18-11, 7-9 SEC) have had one of the worst years in program history, and at times this season have been projected as missing the NCAA Tournament for the first time ever. A first-game exit in the conference tournament would have sealed that fate for Tennessee, but instead they fought their way to a 69-66 win against the LSU Tigers.

The win against LSU likely switches the two, and the Lady Vols find themselves with some good chances to make the NCAA Tournament again. They will face the #5 Mississippi State Bulldogs Friday at 12:00 PM. If Tennessee does manage to upset State, then they will be a shoe-in for the Tournament. However, a loss will likely not have much of an effect on Tennessee’s chances, but Mississippi State will miss out on a chance as a 1 seed for the Tournament.