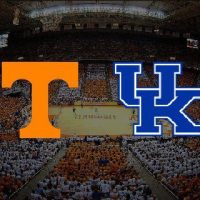 On March 2nd, 2008, the Tennessee Volunteers were 25-3 with 2 conference losses, and they downed the Kentucky Wildcats 63-60. On March 2nd, 2019, the Vols will be 25-3 with 2 conference losses, and they will be hosting the Kentucky Wildcats in a game that will be crucial to claim first place in the SEC and a 1 Seed in the Big Dance.

With 3 games left on the regular season schedule, both Kentucky and Tennessee are locked in a three-way tie for 1st in the SEC, along with LSU. The pressure and stakes in this game is higher than the first matchup in Rupp, which resulted in a Kentucky rout of the Vols.

That matchup was expected to be a monstrous battle between two of the best teams in the country. Instead, Tennessee had its worst night of the year at the worst time possible, and Kentucky hit its stride at the best time possible. The result was an 86-69 score, the largest loss of the season for the Vols.

In the first matchup, PJ Washington shined and Grant Williams was shut down by the Kentucky defense. The Wildcats outscored the Vols 36-20 in the paint, held Tennessee to a season-low 26 rebounds, and they shot nearly 55% from the field while Tennessee shot only 40%. The Kentucky offense has not let up since, and Tyler Herro has emerged as another major player the Vols will need to worry about.

A lot of things will need to go different for Tennessee to make this more of a game this time around. They can afford Williams having a bad game now and again, but it hurts them more when Turner, Bowden, and Schofield combine for 1-17 from behind the arc. Schofield and Turner have both turned corners since, but Bowden still has some catching up to do.

Interior defense and rebounding was another huge factor in the routing, and all eyes will be on Kyle Alexander and John Fulkerson in that spot. Both combined for 5 rebounds and 1 block inside Rupp, but Saturday night will need to be a lot better for both of them. Alexander has reportedly been suffering from flu-like symptoms, and saw his playing time shortened against Ole Miss. Fulkerson has stepped up lately and the Vols barely miss a beat with him in, but he will need to up his physicality against the Wildcats.

Kentucky will be coming into an arena where the Vols haven’t lost in over a year, but they also have the confidence from their last matchup and the games in between that should shake off any sort of pressure. They still can’t overlook the Vols, and they will need to play as well together as they did in the last matchup in Rupp.

Since that game, PJ Washington and Tyler Herro have been the two shining stars for the Wildcats. Over the past two weeks, the pair has averaged a combined 38.3 ppg, 12.8 rpg, and 4.3 apg. Keldon Johnson is also averaging 13.6 ppg and is another weapon the Wildcats have that can step up for either Washington or Herro.

Herro was also a nightmare for Tennessee on the defensive boards at Rupp, recording 11 grabs off the glass from the Tennessee offense. If he has the same kind of game against Tennessee this Saturday, then the Vols will be in big trouble.