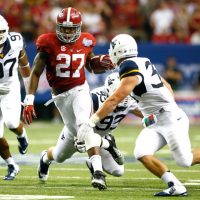 Alabama announced earlier today that they have agreed to terms with West Virginia for a home-and-home series in 2026-27.

The Crimson Tide most recently played West Virginia in 2014 at the Chick-fil-A Kickoff Game in Atlanta, winning 33-23. That was the only time Alabama and the Mountaineers have ever met in the 100-plus year history of both programs.

Should Nick Saban still be the coach at that point, the 2026 game in Morgantown, WV would be a homecoming for him, as he is a West Virginia native.

Series Announcement‼️ Home-and-home scheduled with West Virginia for the 2026 and 2027 seasons.

This home-and-home series fits into a recent trend of scheduling for Alabama, as they are starting to get away from the neutral site games for their SEC-mandated, non-conference Power 5 match-up. As they have also set up home-and-home series with Texas and Notre Dame in the 2020s.