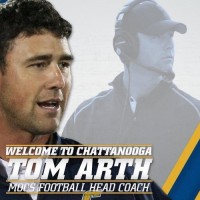 Arth was most-recently the head coach at D-III John Carroll University in Cleveland, Ohio and was named NCAA Division III National Coach of the Year after leading his alma mater to an impressive 12-2 overall record in 2016 and an appearance in the D-III semifinals. Arth’s JCU teams went 40-8 in his four-seasons at the helm.

Arth was introduced on Tuesday at a noon press conference on the UTC campus. Later in the day, Arth dropped by the ESPN Chattanooga studio to join Press Row for a few segments.

The podcast can be listed to at the audio player below.