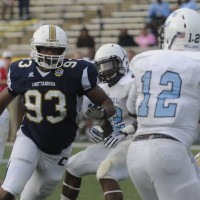 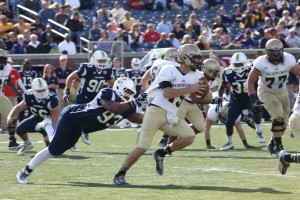 University of Tennessee at Chattanooga senior defensive end Keionta Davis announced today that he has accepted an invite to participate in the 2017 Reese’s Senior Bowl. Davis led the Mocs with 10.5 sacks during the 2016-17 season, and was named the 2016 Southern Conference Defensive Player of the Year.

Played at Ladd Peebles Stadium in Mobile, Alabama; the Reese’s Senior Bowl is regarded as the premier college all-star game, featuring the country’s top senior performers and NFL draft prospects. Competing players are divided into two teams representing the North and South and are led by the entire coaching staffs of two National Football League teams.

The Senior Bowl is played annually on the weekend prior to the Super Bowl. This year’s game will be held on Saturday, January 28 at 2:30 p.m. (E.S.T.) on the NFL Network.

Davis earned All-American honors and finished his collegiate career second all-time at UTC with 31.0 sacks. Davis’ 31.0 career sacks rank seventh all-time in SoCon history. The Chattanooga native also finished ninth in the voting for this season’s Buck Buchanan Award, which goes to the top defensive player in the FC.