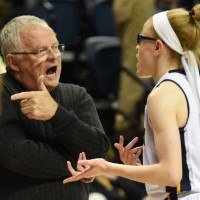 The wait is over and it was worth it.

The University of Tennessee at Chattanooga women’s basketball schedule for the 2016-17 season is ambitious to say the least. The Mocs will host 12 games, participate in the Naismith Memorial Hall of Fame Women’s Challenge and take on the four-time defending national champs on their home court.

Chattanooga’s non-conference home slate is arguably its best ever. It features Notre Dame, Florida, Indiana, Wisconsin Green Bay and Stetson through November and December. On the road, the going doesn’t get any easier. The Mocs will take on four-time defending National Champion UConn, open the season at Rutgers, face off against WNIT runner-up Florida Gulf Coast, travel to UT Martin and Presbyterian while taking on Lafayette, Bowling Green, Louisville and Maine in the Naismith Memorial Hall of Fame Women’s Challenge.

The season opens on the road November 11th in New Jersey. The Mocs will take on Rutgers for first time since beating the Scarlet Knights in the first round of the 2004 NCAA Tournament at the Roundhouse. Rutgers posted a 19-15 mark last year, finished tied for ninth in the Big Ten and defeated Georgetown to advance to the second round of the Women’s National Invitation Tournament (WNIT).

Chattanooga will return home to take on SEC foe Florida for the first time since 1986. The Mocs lead the series 2-1 and all three matches have been at neutral locations. Florida, who fell to Albany in the opening round of the NCAA, tied Kentucky for fourth in the SEC standings.

UTC will stay at home to face Indiana a few days later. Last year the Hoosiers knocked the Mocs out of the Preseason WNIT at Assembly Hall in Bloomington. Indiana was 21-12 overall in the 2015-16 season and fourth in the Big 10 with a 12-6 mark. In the NCAA Tournament, they defeated Georgia in the first round before falling to host Notre Dame in the next.

The Hall of Fame Challenge will start at Louisville for the Mocs and opens against Lafayette College of the Patriot League. The Leopards were 6-23 overall and 4-14 in league play, falling in the first round of the conference tournament. The next day, UTC will take on Bowling Green. The Falcons were 10-18 on the year and 6-12 in the MAC.

Chattanooga will close out this portion of the HOF Tournament with host Louisville on the third day. Chattanooga is 5-1 against the Cardinals. Louisville grabbed its first victory over UTC in the 2007-08 UTC Courtyard Classic at the Roundhouse.

The Mocs will travel to Springfield, Mass., to take on Maine in the final game of the Challenge at the MassMutual Center. See the link above for ticket information.

Before heading north, the Mocs will host Wisconsin-Green Bay, a strong mid-major team in the Horizon League. The Phoenix posted a 28-5 record last season and faced off with Tennessee in the first round of the NCAA Tournament. After leading the Lady Vols for much of the game, Green Bay fell after a fourth quarter push by Tennessee to make it 59-53.

The Phoenix ended the season ranked fifth in the CollegeInsider.com Mid-Major Top 25 and drew one first place vote.

November will close out with a reunion between Chattanooga head coach Jim Foster and his former assistant Geno Auriemma. The Mocs will face off against the four-time defending national champions UConn on their home court in Storrs, Conn.

In December, the Mocs will host Stetson and Notre Dame while traveling to UT Martin, Florida Gulf Coast and Presbyterian.

The Irish will come calling after Christmas in a return game from two seasons ago. This will also be a reunion for Foster as Notre Dame head coach Muffett McGraw was his assistant at St. Joe’s following the departure of Auriemma.

Notre Dame closed out the year 31-1 after being stunned by Stanford in the Lexington Regional semifinal of the NCAA Tournament. It will be just the second time the two teams have met and the first in Chattanooga.

Stetson posted a 20-12 mark and were fourth in the Atlantic Sun. The Mocs are 10-1 against sister school UT Martin and have won each of the last two meetings. The Skyhawks went 22-10 on the year and won the OVC regular season. UTM was dismissed from the league tournament by eighth seeded Murray State and advanced as far as the second round of the WNIT after beating Memphis.

Florida Gulf Coast, another top mid-major foe on the books, will host the Mocs just before the holiday break. The Eagles ended the season ranked eighth in the College Insider poll and received one first place vote. FGCU was 33-6 last season and advanced to its fifth straight Atlantic Sun championship game but fell by a 56-54 margin to Jacksonville. The Eagles blew through the WNIT, making it to the title game but came up short to South Dakota.

The non-conference slate closes out on the road just before the New Year at Presbyterian College. The Blue Hose were 18-13 last season and 13-7 in the Big South.

Chattanooga will open the Southern Conference portion of its schedule on the road at Samford and conference co-champion Mercer. The two road games against the Bulldogs and Bears last year were the Mocs first two SoCon losses since January 2012.

UTC returns to McKenzie for a three-game home stand against ETSU, Western Carolina and UNCG before closing out the month on the road at Wofford and Furman.

February will have four home games beginning with Mercer and then Samford. A three-game road trip to ETSU, UNCG and Western Carolina will close out the away portion of the schedule. Chattanooga ends the season at the Roundhouse against Furman and Wofford.

There will be four double-headers on the schedule including the season finale on February 25. The Mocs will host Wofford and honor its seniors following the game.

The Southern Conference Tournament returns to Asheville, N.C., and will take place March 2-5 at the U.S. Cellular Center in downtown.

Chattanooga returns 11 letterwinners from last year’s roster including starters Jasmine Joyner, Keiana Gilbert, Aryanna Gilbert and Queen Alford. Chelsey Shumpert, who sustained a season-ending injury after three games, will make her return and Shelbie Davenport who sat out after transferring from Clemson is eager to hit the court.

Season tickets are on sale now online at GoMocs.com and the McKenzie Arena box office at 423.266.6627 (MOCS). Padded Reserved seats are $125 and General Admission seating is $100.

Get closer to the action with floor seats for $1,000! That price includes FREE concessions in-game, the best parking available and access to hospitality for any women’s games when hosted. For more information on the floor seats, call 423-425-4233.