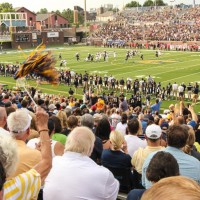 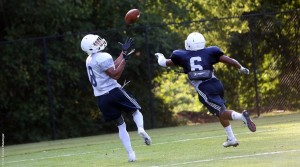 The University of Tennessee at Chattanooga football team enters the 2016 campaign with the highest preseason national ranking in school history.  UTC checks in at No. 6 in the STATS FCS Poll and No. 7 in the FCS Coaches Poll.  These are the two rankings officially recognized by the NCAA.

The Mocs return 46 lettermen from last year’s team that went 9-4 and won its third-straight SoCon title.  That is the most returning from one season to the next in Russ Huesman‘s tenure.

The rest of the Top 10 is No. 6 Chattanooga (9-4), which is picked to win the SoCon title again; Charleston Southern (10-3), the defending Big South champ; South Dakota State (8-4) from the Missouri Valley; William & Mary (9-4), a defending CAA co-champ; and Illinois State (10-2), a defending Missouri Valley co-champ.

In the Coaches Poll, Charleston Southern is one spot ahead of UTC.  SoCon foe The Citadel is No. 15 in both rankings.  Wofford, Western Carolina and Mercer also received votes.

A national panel of sports information and media relations directors, broadcasters, writers and other dignitaries select the STATS FCS Top 25. In the voting, a first-place vote is worth 25 points, a second-place vote 24 points, all the way down to one point for a 25th-place vote.

The Top 25 is released every Monday afternoon during the regular season, except for Sunday morning, Nov. 20, prior to the selection of the 24-team FCS playoff field. A final Top 25 will follow the FCS championship game, which will be held Jan. 7 in Frisco, Texas.

The FCS Coaches Poll is based exclusively on a voting panel of head coaches in the FCS under the cooperation of the Collegiate Commissioners Association (CCA) and the American Football Coaches Association (AFCA) and is administered by the Southern Conference.

Next
Spain and Fitz