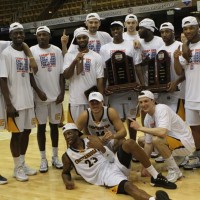 ASHEVILLE, N.C. — First-year coach Matt McCall remembers meeting his Chattanooga players last year for the first time and asking them to buy into his system.

They did, and 11 months later, the Mocs are headed to the NCAA Tournament.

Greg Pryor and Tre’ McLean each had 13 points, and top-seeded Chattanooga held on to defeat second-seeded East Tennessee State 73-67 on Monday night to win the Southern Conference championship to earn an automatic bid to the field of 68. 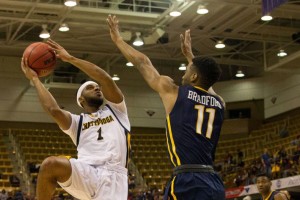 “When I walked into the meeting room, they sort of looked at me like I was this punk kid from Gainesville, Florida,” McCall recalled with a laugh. “Hey, it would have been easy for these guys to go their own separate ways. They didn’t. They deserve this.”

With the win, Chattanooga claimed its 11th SoCon tournament title, one shy of all-time leader Davidson, which is now in the Atlantic 10. 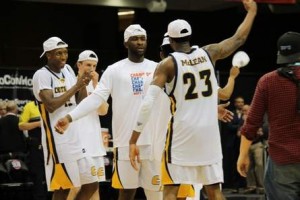 After the game, McCall hugged McLean at midcourt and said, “We’re going, baby.”

Pryor, who also had six rebounds and three assists, was named the tournament’s Most Outstanding Player.

For Robertson, a senior, the win was extra special.

“The past three years we have lost the first game of the tournament, so to win this is an awesome feeling,” Robertson said.

It was Chattanooga’s third win over ETSU this season.

ETSU trailed by 11 early in the third quarter before Bradford sparked a 14-4 run on a driving three-point play. After Deuce Bello somehow got a 3-pointer from the right corner to bounce off the front of the rim and in, A.J. Merriweather scored off an inbounds pass. Merriweather added an uncontested fast-break layup and hit a short jumper to cut the lead to 52-51.

That was as close as the Buccaneers would get.

Chattanooga seemed to have an answer for every run. McLean and Chuck Ester scored on drives to push the lead back to 5.

After ETSU climbed back to within two, McLean hit a long 3-pointer to push the lead back to five once again.

The momentum swung for good with 4:06 left in the game when Cromer was whistled for a technical foul after arguing that he was fouled on a 3-point shot. First-year coach Steve Forbes then joined in the argument and he was called for a T, too.

Pryor made 3 of 4 foul shots for a 65-57 lead and East Tennessee State never challenged again.

“I told the guys after the game that I took the blame for the loss because that was a bad technical at a bad time,” Forbes said. “That was not characteristic of me. I lost my composure. Obviously, I felt like there was a foul. The referee didn’t feel it was that way, so that went against us. But I can’t lose my composure there.”

The Mocs headed to the locker room with a 38-26 lead behind Pryor, who closed out the first half with a driving right-handed layup as the horn sounded.

Chattanooga used a 22-9 in the first half to open a 30-18 lead when Pryor found Justin Tuoyo ahead of the pack for a fast break dunk.

Chattanooga: Chattanooga was 26 of 31 on foul shots, while ETSU struggled from the free throw line hitting just 6 of 13. … Mocs are 8-6 all-time against ETSU in Southern Conference tournament games.

The win marks the first time the same men’s and women’s teams from the Southern Conference will be represented in the NCAA Tournament. The Lady Mocs won their tournament on Sunday.

FIRST TIME IS A CHARM

McCall became the first first-year head coach to win the Southern Conference tournament since Chattanooga’s John Shulman did it in 2005.

Chattanooga: Will play in NCAA Tournament