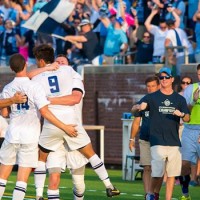 On Saturday night, Chattanooga FC took the pitch in front of a record-breaking crowd of 18,227 at Finely Stadium. Multiple reports label it the largest crowd ever to witness an amateur club soccer match in the United States. Unfortunately for the assembled masses, CFC came up one goal short against New York Cosmos B in the National Premiere League championship match that took extra-time to settle. The loss marks the fourth time Chattanooga FC has come up short in the championship match in six years.

CFC head coach Bill Elliott, who coaches the men’s soccer team at West Florida during the collegiate season, joined Press Row on Monday to chat about the championship match and unbelievable atmosphere over the weekend at Finley Stadium.