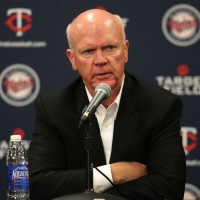 Twins general manager Terry Ryan is in the Scenic City this week checking in on prospects with the AA-Chattanooga Lookouts. On Friday, Ryan joined David Paschall and Jay Greeson on Press Row to chat about Byron Buxton, Miguel Sano and other top prospects in the Twins organization. During the segment, Ryan also expressed his thoughts on the new pitch clocks, shortening the MLB season from 162 to 154 games, and Alex Rodriguez.

The full segment is available for your listening pleasure below.